Oh my gosh, it’s been so long since I’ve blogged! I kept meaning to, but you know what they say about good intentions. Anyway, I could ramble on about what I’ve been doing for the past month (Galley pages! Broken refrigerator/freezer spoiling all the food! More work stuff! Mini-vacation!) Or, I could post a little snippet from WICKED BITE and let you see what happens when Veritas tries to chew Cat out for not keeping Ian in check (hint: it doesn’t go the way Veritas intends ;)). 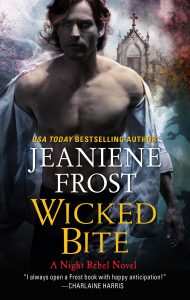 If you haven’t read the prologue and first three chapters from WICKED BITE, they’re here, and yes, you should read them before reading the below because they provide context. This scene snippet is from Chapter Six, for additional context. Oh, and SPOILER WARNING: If you haven’t read the first Night Rebel book, SHADES OF WICKED, you WILL get spoiled on some pretty major plot points if you read the below. All disclaimers and spoiler warnings aside, enjoy!

As luck would have it, one of my leads on another possible resurrected soul was only about two hours away. I drove straight there since I’d already lost over a day dealing with the disastrous court hearing. Silver would just have to wait in the car while I found out if this was a real sighting or another false lead. Either way, once I was finished, I intended to follow my own advice and get the hell out of Greece.

I hoped Ian did, too, as soon as the spell lifted. He couldn’t be so reckless as to stay and keep looking for me, could he? My stomach clenched. Yes. Ian was fearless and he didn’t remember how powerful Dagon was. Or how vindictive.

I had to make sure that he left. I drove one-handed while I dug through my purse for my mobile. Then I called the number I’d programmed in several weeks ago. Instead of the male British voice I expected, a woman with an American accent answered.

“Hi, Cat,” I said with false cheerfulness. She wasn’t my intended victim, but Ian had me so wired up on frustration and fear, she’d do. “Are you or Bones near Greece?”

“What’s wrong?” It burst out of me loud enough to make Silver jump. “You and Bones promised to keep Ian safe, but less than one month after I leave him with you, he’s angering the highest court in vampire society while practically GPS-ing his location to Dagon since everyone knows where the council meets when they’re in session!”

“I still don’t know if it was Ian’s stunning bribe or the council’s shock that someone had the balls to sue them that kept them from sentencing him to death!” I continued to rage. “Either way, I’ve got Ian safely confined in a villa with Mencheres until dawn, but he needs to get out of Greece as soon as the spell lifts. Obviously, I can’t trust Ian to stay out of danger on his own, so I ask again, are you or Bones near Greece?”

“Are you done?” Cat asked in a sharp tone.

“Yes, and I’m waiting for your reply.”

“Oh, I didn’t mean are you done talking,” she said, now sounding dangerously cheerful. “I meant, are you done losing your shit? Because if you think you’re fed up after dealing with Ian for one night, try dealing with him for the past few weeks. Bones and I have chased him all over the fucking world trying to get him to listen to reason, and thanks for telling us that Ian can now teleport, by the way! I’ve had better luck chasing a ghost, and I mean that literally.”

“Ian can teleport?” I’d so hoped what I’d seen at the villa had just been him moving very fast . . .

“Yeah, and last week, Ian let us know he was sick of us trying to baby-sit him by leaving a few spells behind for us. One of the spells turned me mute for two days, and another melted Bones’s fangs off! I didn’t even know that was possible—”

“—but his fangs were gone! Ian’s lucky they grew back or I’d be hunting him down, all right, and that demon would have nothing on what I’d do to Ian once I caught him.”

“Perhaps calling you wasn’t such a good idea,” I muttered.

“You bet it wasn’t,” she flared. Then her tone softened. “Look, I get that you’re scared for him. I don’t want Ian to get hurt, either. But he’s made it clear he won’t be controlled by Bones, by me, or anyone else. I give it two minutes after your spell’s up before he’s gotten away from Mencheres, too. So, if you want Ian out of Greece, you’ll have to get him out yourself. You’re the one he’s obsessed with anyway.”

“I can’t.” Despite my effort to maintain control, my voice cracked at the last word. “It’s not safe,” I finished in a stronger tone.

Cat sighed. “I know you said demons were after you, but that’s not going to stop Ian. He’s not the run-and-hide type. He’s the stay-and-fight type. Believe me, we tried to get him to change, and we failed.”

I almost flung my mobile through the windshield, because she was right. Dammit, she was right! Ian had never backed down from a fight, no matter the danger. Now what was I supposed to do?

As if I’d asked that out loud, Cat said, “If I were you, I’d concentrate on killing whoever is threatening to Ian. I know that’s damn near impossible, but I still think you’ll have a better chance against a bunch of pissed-off demons than you will at getting Ian to suddenly stay inside and take up knitting.”

She was probably right again, but I had an oath to fulfill. Still, this was one more reason to want Dagon dead, and I didn’t have to abandon my oath to search for the other resurrected souls in order to kill Dagon. I could multi-task.

“My apologies for my misdirected ire before,” I said.

I hung up so fast, I didn’t hear the rest of her reply. Was what I felt for Ian that obvious?