You are here: Home / Discount Ebooks 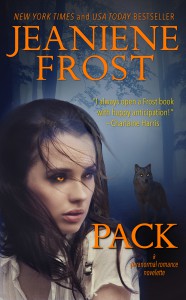 Previously published in the Mammoth Book of Paranormal Romance and the Under Her Skin anthologies—now updated to include over 20% more sizzling extra material.
Lost in the woods…
Marlee Peters is tired of putting her dreams on hold, so when her friends can’t continue on a long- anticipated hike of Yellowstone National Park, she goes on without them. But Marlee isn’t alone in the woods; she’s being hunted by a pack of frighteningly intelligent wolves. When a fight for survival takes an impossible turn, Marlee realizes that the enigmatic stranger who saves her might either be her dream come true…or her waking nightmare.

Big, bad wolf…
As the pack’s enforcer, Daniel is sworn to keep the existence of werewolves a secret. He knows that Marlee’s bites may change her life in a way she can’t imagine, but if they don’t, he can’t let her tell others about his race. Yet Marlee is awakening Daniel’s most primal urges, and soon, neither one of them will be able to resist the call of the wild… 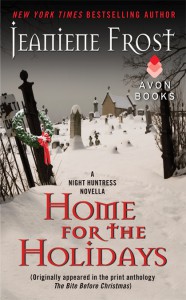 Home For The Holidays

Cat and Bones’ yuletide plans are shattered when a mysterious stranger shows up and reveals long-buried secrets that threaten to take a bite out of their holiday cheer … and lives. Story previously appeared in The Bite Before Christmas anthology. 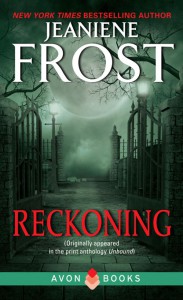 In New Orleans, a pair of undead serial killers are about to turn Mardi Gras into a horror show—unless the immortal hitman Bones can hunt them down first. From Jeaniene Frost comes a thrilling prequel novella featuring characters from her New York Times bestselling Night Huntress series. Originally appeared in the anthology Unbound. 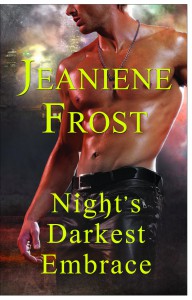 Enter the dark realm of Nocturna, where blisteringly sexy Raphael dominates the demons of a lawless dimension and tries to help a beautiful young woman avenge her cousin’s disappearance. Note: Originally appeared in the Haunted By Your Touch anthology. Not related to the Night Huntress universe. Read the first 20% here. 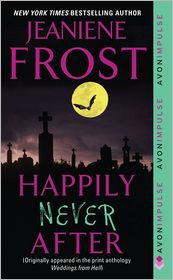 Isabella Spaga is about to reluctantly walk down the aisle with Mr. Dangerously Wrong…but not if dashing vampire Chance has anything to say about it. As a favor to Bones, Chance has come to derail this wedding of beauty to the beast. Now if only he can keep his hands off the bride. From New York Times bestselling author Jeaniene Frost’s Night Huntress world, it’s the wedding of the season…that everyone wants to miss. (Originally appeared in Weddings From Hell anthology) 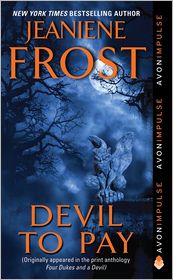 Blake Turner had it all—until a demon decided to take residence in his soul. Plagued with constant black outs and a trail of dead bodies in his wake, Blake thinks vampire Elise is his best chance at ending the nightmare. It’s just too bad he’s fallen in love with the gorgeous vamp right before he has to die… Featuring characters from New York Times bestselling author Jeaniene Frost’s Night Huntress world. (Originally appeared in Four Dukes and a Devil anthology)