Hi, everyone! I’ve finally been given the green light to announce that audio rights for the upcoming Broken Destiny series sold at auction to Blackstone Audio in what Publishers Marketplace would classify as a “significant” deal. Blackstone (called Downpour on the consumer end) was the audio publisher for my first eight novels, so I’m thrilled to be working with them again.

I’m also thrilled to announce that Tavia Gilbert, the audio narrator for all my vampire novels, will be narrating the new series, too. Tavia is a genius with accents, emotions and performance, so I can’t wait to hear her rendition of the books.

Speaking of the new series, I’ve been promising you an excerpt from book one, THE BEAUTIFUL ASHES, and now I’m finally putting out ;). This excerpt takes place in Chapter Two, so it’s still early in the story. For a little context, my heroine arrived in town only to be attacked twice and then saved by a stranger, but as you’ll see, that’s just the beginning of her problems.

If you’ve never heard me talk about the new series before, I’m pasting the cover and description below. If you’ve already seen that, just skip to the new stuff after it. Hope you enjoy! 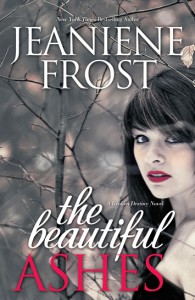 In a world of shadows, anything is possible. Except escaping your fate.

Ever since she was a child, Ivy has been gripped by visions of strange realms just beyond her own. But when her sister goes missing, Ivy discovers the truth is far worse—her hallucinations are real, and her sister is trapped in a parallel realm. The one person who believes her is the dangerously attractive guy who’s bound by an ancient legacy to betray her.

Adrian might have turned his back on those who raised him, but that doesn’t mean he can change his fate…no matter how strong a pull he feels toward Ivy. Together they search for the powerful relic that can save her sister, but Adrian knows what Ivy doesn’t: that every step brings Ivy closer to the truth about her own destiny, and a war that could doom the world. Sooner or later, it will be Ivy on one side, Adrian on the other, and nothing but ashes in between…

A familiar song was playing, but I couldn’t remember the name. That bugged me enough to open my eyes. A wall of black met my gaze, slick and smooth like glass. I reached up to see what it was, and that’s when I realized my hands were tied.

“Silent Lucidity” by Queensryche, my mind supplied, followed immediately by, I’m in the backseat of a car. One that was well taken care of, going by that flawless, shiny roof. With those details filled in, I also remembered what had happened right before I’d passed out. And who I was with.

“Why are my hands tied?” I said, heaving myself into an upright position.

For some reason Adrian didn’t have a rear view mirror, which was why he had to glance over his shoulder to look at me.

“Does anything make you panic?” he asked, sounding amused. “You’re tied up in the backseat of a cop-killer’s car, but I’ve seen people get more upset when Starbucks runs out of pumpkin spice flavor.”

Anyone normal would panic, not that it would do any good. Besides, I ran out of “normal” a long time ago, when I realized I saw things no one else did.

Speaking of which, why wasn’t I in pain? The lump where Mrs. Paulson had whacked me was gone, and my shirt was red from blood, but aside from a mild kink in my neck, I felt fine. When I pushed my shirt up, somehow, I wasn’t surprised to see smooth, unbroken skin on my abdomen. Well, that and a bunch of crumbs, like I’d eaten a dessert too messily.

“Why does it look like I have angel food cake on my stomach?” I wondered aloud.

“You can tell me how I’m not anymore,” I said, holding out my bound hands, “after you untie me.”

Another backwards glance, this one challenging.

“You may be the calmest person I’ve ever been sent to retrieve, but if I tell you now what you want to know, that will change. So pick—the  truth, or being untied?”

He let out a laugh. “Another first. You’re full of surprises.”

So was he. He’d just admitted that he regularly kidnapped people—which was how I translated “retrieve”—so I should be trying my damnedest to get free. But more than anything, I needed answers. Besides, I still wasn’t afraid of him, and somehow, that had nothing to do with him magically healing me.

He turned once again and his gaze locked with mine, those odd blue eyes startling me with their intensity. For a moment, I could only stare, all thought frozen in my mind. I don’t know why I reached out, awkwardly touching his arm to feel the hard muscles beneath that bulky jacket. If I’d thought about it, I wouldn’t have done it. Yet I couldn’t make myself pull away.

Then I gasped when his hand covered mine. At some point, he’d taken off his gloves, and the feel of his warm, bare skin sent a shock wave through me. The touch seemed to affect Adrian, too. His lips parted and he edged over the back of the seats—

He yanked on the steering wheel, narrowly avoiding another car. A horn blared, and when the driver passed us, an extended middle finger shook angrily in our direction. I leaned back, my heart pounding from the near collision. At least, that’s what I told myself it was from.

I didn’t recognize the word, and I was at a loss to place his accent. It had a musical cadence like Italian, but beneath that was a harsher, darker edge.

“What’s that language?” I asked, trying to mask the sudden shakiness in my voice.

This time, he didn’t take his eyes off the road. “Nothing you’ve heard of.”

“I picked truth, remember?” I said, holding up my bound hands for emphasis.

That earned me a quick glance. “That is the truth, but you don’t get more until you meet Zach. Then we can skip all the ‘this isn’t possible’ arguments.”

I let out a short laugh. “After what I saw on Detective Kroger’s face, my definition of ‘impossible’ has changed.”

Adrian swerved again, but this time, no other car was near.

I tensed. How did I explain without sounding insane? No way to, so I chose to go on the attack instead.

“Why were you in my hotel room? And how did you heal me? There isn’t even a mark—”

Despite his hard tone, when my name crossed his lips, something thrummed inside me, like he’d yanked on a tie I hadn’t known was there. Feeling it was as disturbing as my inexplicable reaction to his clasping my hands.

“Shadows,” I said quickly, to distract from that. “He had snakelike shadows all over his face.”

I expected Adrian to tell me I’d imagined it, a response I was used to hearing. Instead, he pulled over, putting the car in park but keeping the engine running. Then he turned to stare at me.

“Was that the only strange thing you saw?”

I swallowed. I knew better than to talk about these things. Still, I’d demanded the truth from Adrian. It didn’t seem fair to lie in return.

“I saw two versions of the same B and B earlier. One was pretty, but the other was old and rotted, and my sister was trapped inside it.”

Adrian said nothing, though he continued to pin me with that hard stare. When he finally spoke, his question was so bizarre I thought I’d misheard him.

“My appearance.” He drew out the words like I was slow. “Describe me.”

All of a sudden, he wanted compliments? I might have finally met someone crazier than me.

“This is ridiculous,” I muttered, but started with the obvious. “Six-six, early twenties, built like Thor, golden brown hair with blond highlights, silvery blue eyes…you want me to go on?”

He began to laugh, a deep, rich baritone that would’ve been sensual except for how angry it made me.

“Now I know why they came after you,” he said, still chuckling. “They must’ve realized you were different, but if they’d known what you could see, you never would’ve made it out of that B and B.”

“You can stop laughing,” I said sharply. “I get that it’s crazy to see the things I do.”

Lots of kids had imaginary friends growing up. I had imaginary places, though at first, I didn’t know I was the only one who could see them. Once my parents had realized that what I kept describing went far beyond childhood fancifulness, the endless doctor visits and tests began. One by one, diseases and psychoses had been crossed off until I was diagnosed with a non-monoamine-cholinergic imbalance in my temporal cortex.

In other words, I saw shit that wasn’t there for reasons no one could figure out. The pills I took helped a little, though I lied and said they got rid of all my hallucinations. I was sick of doctors poking at me. So whenever I saw something that no one else did, I forced myself to ignore it—until Mrs. Paulson and Detective Kroger had tried to kill me, of course.

Adrian did stop laughing, and that unblinking intensity was back in his gaze.

“Well, Ivy, I’ve got good news and bad news. The good news is, you’re not crazy. The bad news is, everything you’ve seen is real, and now, it’ll be coming for you.”