Things haven’t been less hectic on the personal front, but at least they’re less worrisome at the moment. The weekend before last, instead of going to Apollycon, I went to see my dad. For those of you who read my previous post, I’m happy to say that Dad did not end up needing a new heart surgery. He’s currently in a rehab center, recovering after this most recent health setback. In the interim, my sister (not the one who’s my dad’s caretaker; my other sister) has been staying with me while dealing with her own health issues. She’s had two surgeries in two weeks, but she’s doing better and – fingers crossed – the issues that necessitated those surgeries should now be resolved. To say I’m currently breathing a big sigh of relief is to put it mildly.

I gave brief updates regarding the above on my Facebook and Twitter accounts. One of the responders offered her well wishes for my family along with this suggestion, paraphrased below:

“Since you’ve gotten good news about your family, how about you celebrate it by giving us another peek from Ian’s book?”

I’m all for sharing a good mood with others, so I thought this was an excellent idea. This is currently chapter eleven, but I’m anticipating that it might be cut from the final version of the book. Why? Everyone that read my commentaries in Outtakes From The Grave already knows – pacing! This scene doesn’t really reveal anything new about the characters personally (as compared to previous chapters); it doesn’t reveal a new obstacle for the characters to overcome; it doesn’t reveal any new world-building secrets, and it isn’t necessary to move the characters forward to deal with any of the aforementioned. Why did I write it, then? *grins* Because I didn’t know this until AFTER I wrote it and could look at it in context. All the above makes it good for an excerpt, though, since it won’t spoiler things. And, truth be told, I might be professional enough to know there’s a good chance I’ll have to cut this scene, but I liked it enough to write it, so I still want to share it. And hey, if my editor likes it enough (hi, Erika!) it might stay after all :). 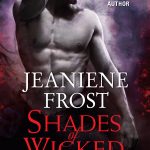 Note: if you haven’t read chapter one yet (posted here), you should do that before reading this. Otherwise, you could feel a little lost. Oh, and standard disclaimer about all pre-published excerpts: it hasn’t been revised or copyedited, so you might find spelling errors, grammar errors, and missing/incorrect words. It also might change from the final, published version, assuming it makes it into the final, published version. All that said – and whew, that was a lot! – happy reading 🙂

The entrance to our hotel had been swept clean, but the rest of Times Square was still coated with streamers, confetti and other remnants from celebrations the night before. Seeing it, I wasn’t sorry we’d spent New Year’s Eve over the border in Canada. Not that I had anything against confetti or streamers; it was the crushing crowds I wasn’t fond of. Times Square on New Year’s Eve was the epitome of that.

When we exited the hotel, the bellman offered to hail a cab for us. Ian turned to me. “Up for a walk instead?”

“Sure.” My ice-blue dress might be formal, but it didn’t restrict my stride, and since I was a vampire, I couldn’t get blisters despite today’s foot-contorting high heels.

Ian offered me his arm, which I took after a brief arch of my brow. “Careful, someone might mistake you for a gentleman.”

He flashed a grin at me. “Anyone who’d make such a mistake deserves what they get.”

His smile made his looks even more distracting, and that was quite an accomplishment. Once again, we’d gotten a suite with two bedrooms, so we’d had privacy while readying ourselves for tonight. When Ian had come out of his room with his auburn hair slicked back so his impossibly beautiful features were highlighted for maximum effect, wearing a tuxedo that draped his tall, muscled form as if the tailor who’d fit him for it had been in love… I’d had to look away before I did something ridiculous. Like proposition him on the spot.

I don’t know why I was having such a strong reaction to him. A week ago, I’d seen him naked and felt less affected. But back then, I hadn’t really seen Ian as a man. I’d seen him as a necessary burden that might end up stabbing me in the back. Now, I knew Ian was dangerously smart, complicated, loyal, powerful, lethal, sexy…and arrogant. Proudly so.

He took every second and third glance from the normally jaded New Yorkers as his due. He even flashed pitying looks at the people who abruptly turned and began to follow him, glancing at me before raising a brow at them as if to say “Sorry, I’m hers tonight, and yes, that is your loss.”

After several instances of this, I was getting irritated. These people could clearly see my arm folded in his. Did I need to take more drastic measures to show that he was not available for their pleasure? Perhaps I’d feed from the next person who spun around and began to follow him like an animal catching an irresistible scent…

“Gods,” I muttered out loud. What was wrong with me?

Ian glanced at me. “Something amiss?”

“No,” I said while thinking yes!

Nearly all vampires were possessive over their personal food sources, their offspring and their lovers, yet Ian was none of those to me. I’d never turned a human into a vampire, so I couldn’t speak for offspring, but I’d never experienced that trademark surge of territoriality with any my former lovers. Or the humans I’d put under my protection. For the past four thousand years, I’d been glad to find myself above such pettiness. So why was I now fantasizing about biting every male and female who did nothing more than make their interest in Ian known?

Lack of control, I decided in a grab for an excuse. I was in the very unfamiliar position of being *censored for spoilers.* I must be trying to distract myself from that by inventing a possessiveness I didn’t really feel.

“Which act would you prefer for tonight?”

His questions broke through my musings. I was all too glad for the interruption. “What do you mean?”

He shrugged. “There’s the new lovers act, the friends-who-fuck act, the swingers act, the gold-digger and sugar-daddy act, the fighting couple act-”

“What about a platonic friendship act?” I interrupted.

He looked at me as if I’d finally spoken a language he couldn’t understand. “Is that a joke?”

I snorted. “Hardly. You might be attractive, but not everyone wants to have sex with you.” As soon as I said it, I cringed. Did that sound as overly defensive as I felt?

“No, some people also want to kill me,” he said at once. “Some want me to turn them into a vampire, some want my money, some want me for my rare artifacts, some for my fighting skills, and one wants to dangle me out as bait for a demon she’s trying to kill. See? No one is with me simply to be with me.”

Guilt pricked me, followed by a rush of empathy. I couldn’t remember the last time someone had been with me just to be with me, either. Wait…yes, I could. Tenoch.

Loneliness and a far deeper wave of guilt swelled, followed as always by pain. How could I have not known what Tenoch was trying to tell me the last time we were together? How could I have been so blind as to miss that he’d been saying goodbye?

As much as I wanted to, I could do nothing for Tenoch. He’d killed himself centuries ago. But I could do something for the man next to me, if Ian allowed himself to accept it.

“I might be with you for ulterior reasons now, but it’s well established that it’s been a while since I’ve gone out for fun,” I said in a carefully nonchalant tone. “And whatever else you are, you are fun, Ian. So, assuming we’re both still alive when this is over, would you accompany me for an evening out?”

He looked at me in amazement. Then he began to laugh. “Offering me a pity date? Now I’ve heard everything.”

“It’s not pity and it’s not a date,” I said, a testier note creeping into my tone when he continued to laugh as if I’d told the funniest joke ever. “Since you’ve never gone out with someone just as a friend, and I’m in clear need of an update on places to have a good time, I thought…oh, never mind what I thought, if you can’t stop laughing at me!”

“My apologies,” he said, still chuckling. “It’s only that I can’t decide which is funnier – my being pitied for an assumed lack of companionship, or the look on people’s faces if they saw you, a venerated Law Guardian, out with an infamous, law-scorning rakehell like me.”

He was right that I’d hear no less than a decade’s worth of snide remarks from some of the more sexist council members, not to mention a few from my fellow Law Guardians, too. But that didn’t matter. “Long ago, I decided I wouldn’t let other people’s disapproval dictate my actions, so as the saying goes, I can handle it if you can.”

His laughter stopped and something flashed over his face, too quick for me pinpoint what it was before it was gone. “If you hadn’t played a part in the execution of my friend’s child, I think I would very much like you, Veritas.”

I couldn’t say that out loud, of course. Not without endangering her, and I wouldn’t do that despite the surprisingly strong urge I had to redeem myself in Ian’s eyes. “You’ll never forgive me for that, will you?”

As if there was any doubt. His calling me by my name instead of his usual moniker of “little Guardian” had been enough to tell me how serious he was.

I met his eyes and held them. “Good. Some things should remain unforgiveable.”

Like everything Dagon had done to me, to Ian, and to innumerable others. Actually, I was grateful for Ian’s reminder of how he saw me – as another merciless player in the execution of a child whose only crime was frightening the bigoted because she’d been born different. Now, I could stop with these ridiculous thoughts and feelings about Ian. They were a waste of time and more importantly, of energy. Nothing mattered except bringing Dagon down. Tonight was one more step toward accomplishing that.

“Pick whatever act you want. I don’t care,” I said, and stared straight ahead for the rest of the walk.