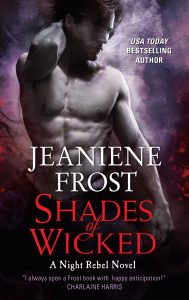 As promised, here is the latest SHADES OF WICKED snippet. In case you missed the other ones, they are HERE and HERE. Each snippet is in linear order as far as the book goes, by the way. Haven’t visited my blog in a while and don’t know what book I’m talking about? Here’s the cover and back cover description.

Veritas’ normal role is police, judge and jury to reprobates like Ian. But she has her own ax to grind with Dagon, so if she can use Ian as bait…well, all’s fair in law and war. As they scour supernatural hotspots to perfect their trap, Veritas soon realizes Ian’s devil-may-care, roguish image hides something much more powerful. And Ian discovers that Veritas has shocking secrets of her own. As they’re drawn to each other with a passion as intense as their peril, either love or justice will prevail. But each will have devastating consequences…

Usual disclaimer: Copyright Jeaniene Frost. This is pre-copyedits, so you might find spelling and/or grammar errors, plus I might add or delete a line or two between now and the published version. Disclaimers aside, hope you enjoy!

Moans drew my attention upward. Long, thick clusters of white and lavender wisteria hung from the high ceiling. A few of the wider clusters had arms, legs, and other body parts protruding from them. Some mage or witch must have bespelled the wisteria bunches so that whoever was inside them could float. People had taken advantage of that perk and were making love with a fervor that made me hope none of them were human. If they strayed too far from the gravity-defying clusters, they’d harm themselves from the fall.

“Keep going,” Ian said, though his brow flicked suggestively as we passed another wisteria cluster with at least three people writhing inside it. “Unless you’re slowing down because you want us to join them?”

I glared at him as I quickened my pace. “No.”

“Would you shut up?” I snapped. He’d hit too close to home with that last remark.

He pulled me back when I attempted to stride ahead of him. “What, then?” he went on as if I hadn’t spoken. “A combination of ghouls, the occasional vampire, and battery-operated devices?”

Once again, he was closer to the truth than I was comfortable with. That’s why my tone was even sharper. “Wouldn’t you like to know?”

His turquoise eyes began to fill with emerald. Then he began to propel me toward the nearest wall. “Perhaps I would.”

I didn’t know what had caused his abrupt change in behavior, but I dug my heels in to stop his progress. Faster than a blink, he picked me up. I debated punching a dent into his head for his impertinence, then decided to see where he was going with this. He might only be acting out the “fighting” part of our “fighting couple” ruse, though I had a feeling this was more serious.

“If I’m wrong about my other guesses, what then?” he murmured, moving so close the full length of our bodies touched. Then he leaned down until his forehead rested against mine. “Demons? They are, as the saying goes, a hell of a ride.”

I wasn’t a fan of being swept off my feet and backed against a wall. If anyone else had manhandled me this way, I’d be slamming my head against theirs hard enough to split their skull. But for reasons that had nothing to do with maintaining our ruse, I didn’t smash Ian’s head, stomp on his feet hard enough to break them, punch a hole through his ribs or do anything else violent. Instead, filled with an urge I couldn’t explain, I trailed my fingers down Ian’s chest with taunting flicks.

“Why do you care who or what I have sex with? You’re not tempting enough for it to ever be you, so how is the rest of it your concern?”

As soon as I said it, I regretted it. It was a blatant dare – and Ian loved dares. His eyes lit with emerald flames and his arms hardened around me. I squirmed, but not nearly as much as I could if I truly wanted to get away. Instead, my efforts only pressed me against him in more suggestive ways.

His nostrils flared. Oh yes, he knew the difference between what I was doing now and what I did when I was serious about breaking his hold. It’s not as if our first fight had left Ian any doubt as to how I acted when I really wanted to get free.

Soon, only scant bits of air separated the most intimate part of our bodies. Another centimeter would have those parts touching. I found myself taking in a breath just to inhale his scent. He glanced down as if wanting me to know that he was thinking about closing that space between us, but he didn’t. Instead, his eyes glowed a brighter shade of green as his mouth slid down until it touched my ear.

“What if I told you I had every intention of changing your mind about taking me for a lover?”

The breath from his words felt like feathers brushing my skin. His hands were on my arms, lightly kneading the pressure points in the softer areas of my flesh. I wouldn’t have considered arms to be an erogenous zone, yet each touch elicited shivers of pleasure that traveled far beyond my limbs.

I should tell him to get away from me. Right now. But what came out was a breathy, “Aren’t you supposed to fighting with me instead of trying to seduce me?”

His low laugh ticked my ear in all the right places. “Who says I can’t do both?”

I didn’t trust my body’s reaction to that. It didn’t help that his light touches and the brushes of his mouth was heightening an ever-growing need. Soon, it was all I could do to keep my hands at my sides instead of sliding them up his back to pull him closer.

I’d intended my tone to be sharp, but once again, it failed. What came out was almost a purr instead. Gods, had it be so long since I’d indulged in a little pleasure that I was about to surrender to the most dangerous supplier of it?

“If you want me to stop, then stop me,” he murmured before I felt the brush of his fangs on my throat. If my heart had still been capable of beating, it would have started to race. I could not be in a more treacherous situation. So why did a reckless part of me wanted to tilt my head back to give him better access?

“Say no,” he went on. “Or shove me away, and I’ll stop.” Then his tone turned darkly promising. “But if you do neither, I absolutely won’t stop.”

His lips brushed against my skin with each word. I shivered and his breath hit me in a sharp exhale as he felt it. His scent changed, deepening into a more luxuriant mix of caramel and cognac. I found myself breathing it in until my chest swelled against his. A lower, rougher sound escaped him and he closed the last space between us.