Destined For An Early Grave

You are here: Home / Night Huntress / Destined For An Early Grave 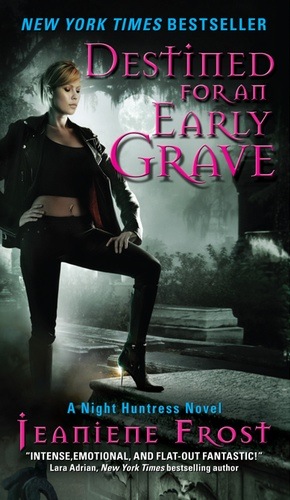 “Destined for an Early Grave holds big changes and many surprises for fans of the series, and should not be missed.”

“If you’re a fan of Frost’s Night Huntress series, you’re going to love this novel.”

“Cat and Bones are back – with a vengeance. Readers will fall in love with all over again with these characters. 5 stars.”

“DESTINED FOR AN EARLY GRAVE is an incredible book, the sort of book you devour in a sitting and are then sorry you’re done with it.”

“If you are looking for an escape to a world of revealing secrets, conflicts of interest between the undead, surprises you don’t see coming, a bit of wit and tantalizing tidbits along the way, you won’t be disappointed.”

“Having read every book in Ms. Frost’s Night Huntress series I can truthfully say – this is the best one yet!”

“This book was a wild ride with a lot of action, drama, and more snark then ever before.”