A Kiss Of Blood

I was able to get an early copy of A Kiss Of Blood by Pamela Palmer and I loved it. Below is the cover and description: 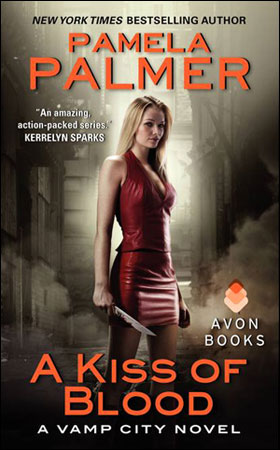 Only one woman can save Vamp City…

One of the few humans who managed to escape the deadly twilight world of Vamp City, Quinn Lennox vows never to return. But the vampires want her back, for only she has the power to renew the magic of their crumbling world and free the vampires trapped within.

When the dangerous and all-too-seductive Arturo Mazza comes for her, Quinn knows she can never trust him after the betrayal she suffered at his hands. But with her beloved brother’s fate hanging in the balance, and her own power beginning to emerge, she chooses to risk all on yet another perilous journey back to Vamp City. And though she tries to deny it, her heart begins to hold hope that even a ruthless vampire can learn the meaning of true love…

Normally when I love a book, it’s easy to tell readers why. But with A Kiss Of Blood, I found myself in somewhat of a quandary. You see, I can’t talk about what I loved in this book without contrasting it against what I didn’t like about its predecessor, A Blood Seduction, and normally I don’t post about things I don’t like in other books.* Add me being friends with the author, and I was very reluctant to dissect my issues with ABS in public.

I broached these concerns with Pamela Palmer. Since her skin is thicker than an alligator, she told me to go for it. So here goes, though I’ll start with what I liked about A Blood Seduction.

Palmer does great multi-layered worldbuilding. A Blood Seduction is set in modern times where an alternate version of Washington, D.C. called Vamp City (or Washington, V.C.). exists alongside the regular one. Vamp City was originally created by a sorcerer as a haven for vampires because it’s always night there. It’s an 18th century parallel of the regular Washington, D.C., where most of its inhabitants still get around by horse and carriage instead of cars. The vampires in V.C. also feed from emotions as well as blood. Some are fear feeders, some lust feeders, and some pain feeders.  In addition to vampires, there are supernatural creatures called Traders, Rippers, and werewolves.

Vamp City might be a haven for its supernatural inhabitants, but if you’re a human, it’s hell on earth. Humans are brought there to be food, slaves, or both. Some arrive by accidentally stumbling through the brief openings between the worlds, as did Quinn and her brother, but once they’re there, they can’t leave. And anyone in their right mind would be desperate to leave. Slavery from a less-than-sadistic master is the best a human can hope for in V.C., and most who arrive aren’t that lucky. There’s a scene in ABS where a pain-feeding vampire rapes a human slave in a horrifying way, and from the reaction of other characters, it wasn’t an unusual occurrence.

And here’s where my personal baggage as a reader comes in. Some readers love when an author goes no-holds-barred on the grittiness, which is why there’s an audience for every novel.  Rape and slavery are already knee-jerk issues for me, so seeing both through the unflinching lens that Palmer points at her world was difficult. I would have preferred fade-to-black instead of detail in this and other violent scenes, but again, that’s me bringing my subjectivity to the table.

Back to the heroine, Quinn. I felt so bad for her. She wasn’t only trying to save her own life after tumbling into this brutal world; she was trying to save her younger brother, too. They were separated after arriving and through most of the novel, she doesn’t even know if he’s alive or dead, but she never gives up her search for him. I admired her for that. What I wanted to shake her over – even while understanding it – was her reaction to the hero, Arturo. You’ve probably heard the phrase “any port in a storm.” Well, Arturo wasn’t Quinn’s “any” port in Vamp City – he was her only port, and she responded to him with all of the reckless trust and gratitude you’d expect from someone who knew her other options were torturous death and more torturous death. Arturo’s sexiness further mired Quinn’s emotions in a Stockholm Syndrome-sort-of quicksand. She knew she shouldn’t count on him – he told her enough not to – but she kept doing it because in a world of monsters, he was the only one not actively trying to chew her up and spit her out.

And here was my biggest problem with ABS: Arturo. I understood why Quinn did what she did with him, even though I wanted to send her to the nearest qualified therapist for it. But his interactions with Quinn were rooted in selfishness. When he was kind to her, it was because he wanted something. He exploited her love for her brother and betrayed her, plus was content to keep Quinn as a slave because, well, that’s what ALL humans were in his world. If not for his one good act at the end of A Blood Seduction, I would have written him off as completely irredeemable.

To be honest, I think I did despite that one good act. Which is why, if Palmer would’ve told me before I read the next novel, A Kiss Of Blood, “You’ll like Arturo by the end of this,” I would have bet her my car that she was wrong.

For the record, if I would’ve made that bet, I’d owe Pamela Palmer a Jeep Cherokee.

*mild spoiler warnings for A Kiss Of Blood*

This book took everything about the characters and world and turned them on their head.  When A Kiss Of Blood opens, Quinn is back home with her brother, who’s dying from some mysterious, magical ailment.  But her brutal experiences in ABS have toughened her instead of broken her, and she’s ready to take the offensive since she knows the villain of ABS will soon be after her. She’s spent her brief respite in her own world trying to ready herself mentally, physically, and magically. If I wanted to shake her while reading ABS, in A Kiss Of Blood, Quinn shook herself for me and has no illusions about Arturo when he shows back up on her doorstep. Despite her (well-earned!) anger with him, she partners with Arturo because she needs to return to V.C. to find a cure for her brother, and he needs her to renew the failing magic that’s destroying his world.

At the start of AKOB, I was rooting for Vamp City to be destroyed, preferably with Arturo in it. But as Quinn and Arturo navigate the deadly world together, some important truths are revealed. The first is that not every supernatural creature is an appalling sadist. Some, for example, are secretly involved in an Underground Railroad to transport humans back to their own world. More side characters like Quinn’s brother, Zack, and a young woman named Lily round out the plot in interesting ways (I love it when side characters are as three-dimensional as the protagonists). The other significant revelation was that the sorcerer who created Vamp City had an ulterior motive: he wasn’t really making a haven for vampires, he was making a death trap for them. Unbeknownst to the vampires, the magic fueling V.C. was always intended to fail, but before it did and doomed them, it would corrode their souls, one evil deed at a time.

That’s why Vamp City is such a brutal place by the time Quinn stumbles into it. The magic has almost completed its two-fold task and all but the strongest vampires are now cruel shells of their former selves. Quinn’s magic as a sorceress, however, counteracts the damage to those in close proximity with her, as Arturo is. Arturo, as though waking up from a nightmare, is wracked with guilt when he realizes the horrible person he’d transformed into over the centuries. He resolves to make it up to Quinn even as he fights the poison still eating at his soul. It was actually heartbreaking to watch him view his once-close friends through his reawakened conscience and wonder if there was any hope that they, too, could be returned to their former selves. I have to hand it to the original sorcerer, Blackstone: it’s one thing to devise a long-term plan to kill your enemies. Quite another to kill them only after rotting their souls until there’s nothing left. For that, Blackstone wins the Diabolical prize, in my opinion.

Speaking of Blackstone, more of Quinn’s magical background is revealed, explaining why she’s such a powerful sorceress on one hand and yet can’t control her magic on the other. I really enjoyed that twist. It added more depth to her character as she does whatever she can to master her magic in time to save the city and her brother. Quinn’s refusal to blindly fall back into a relationship with Arturo also got a big thumbs up from me despite my changed opinion of him. AKOB does bring on heavy heat between the two, though this time, her attraction to Arturo felt genuine instead of influenced by desperate circumstances. As for Arturo, his feelings for Quinn shone through so when he apologized – repeatedly – for what he’d done in book one, I believed him instead of thinking he was saying it for selfish reasons. Another thing I really appreciated was that despite the personal developments, Quinn and Arturo continued to try and save others no matter the personal sacrifice entailed. That made me root like mad for them, and I can’t wait to see what happens in book three.

In short, I heartily recommend A Kiss Of Blood. I’ll go even further to say that if you have the same issues I do with certain themes, you may not want to read A Blood Seduction first. Palmer recaps enough of what happens that you shouldn’t feel lost, and A Kiss Of Blood has the same world complexity without detailing “on page” the harshest aspects of Vamp City.

A Kiss Of Blood releases tomorrow, June 25th. If you’re interested, here are some ordering links because I’m helpful like that ;-). Amazon, B&N, Indiebound, BooksAMillion.

*For a detailed explanation of why I don’t review books I dislike, go here.