Outtakes From The Grave update 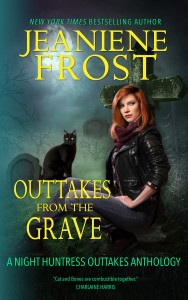 Back in July, I mentioned that I was compiling the best of the deleted scenes and alternate versions from my first four Night Huntress novels into a pseudo-anthology called Outtakes From The Grave. I’m happy to tell you that Outtakes comes in at over 117K words, making it longer any of my previously-published novels, so I found a lot of never-before-posted material. It is currently being copy edited, and it will release in ebook on December 22nd, 2015, so just in time for the holidays :).

I’m also working on having it out in audio and print as well. More info on that once I have it.

In the meantime, I wanted to give everyone a teaser of what Outtakes From The Grave will contain, so I’m sharing my author commentary on the below chapters. Of course, in the collection, these commentaries will be followed by the deleted scenes or alternate versions, but I’m not posting those here (Evil Author strikes again! ;)). I pulled these chapters at random, but in the anthology, everything is laid out in chronological order according to the Night Huntress series timeline. Also, each deleted scene or alternate version is broken into its own, individual chapter, and the author commentary provides a description of the content. That way, readers can decide which parts they wanted to read, and which parts they wanted to skip. So, without further ado, here is a sampling of what you can look forward to in Outtakes From The Grave. As mentioned, what I have below is pre-copy edits, so if you see spelling or grammar errors now, they’ll be fixed in the published version.

Bones’s point of view after their “first time.”

Author’s note: Readers have often asked me if I will ever re-write Halfway To The Grave through Bones’s point of view. The answer is probably not. For starters, when you’re in a character’s head, that character loses a lot of mystery because readers know what he or she is thinking or feeling. Second, I’ve also found that being inside a character’s head paints them in a much harsher light for the reader. Not only do readers experience the character through action and dialog, they hear everything the character doesn’t say, and unfiltered thoughts can be ugly at times. So, if I rewrote Halfway To The Grave through Bones’s point of view, I fear that Bones would lose some of his mystique and sensual edge. After all, Cat might have thought that Bones was sexy and irresistible, but Bones would never think of himself that way. What character would? (Oh, okay, Ian would, but that’s another topic ;).

However, years ago, I did take a stab at writing a chapter from Halfway To The Grave from Bones’s point of view, and I’m including it below. It takes place immediately after the first time Cat and Bones slept together, for context, and I was surprised by how sentimental and introspective Bones turned out to be.

When Cat Met Belinda, a.k.a Sunshine

Author’s note: Some readers might remember that Belinda was one of the vampires that Don had kept captive at the compound so that his scientists would have a steady supply of vampire blood in order to make Brams. Readers might also remember that Bones had a history with Belinda, and Cat was not happy when she found out about that. The scene where Cat first caught Belinda was in the original version of One Foot In The Grave, but it ended up being cut because I thought that readers would rather have Bones appear on the page sooner than see Cat on another hunt with her team.  However, I loved Cat’s interactions with Tate, Juan, Dave and the rest of her team, so I’m glad that I saved this instead of deleting it entirely.

Author’s note: In the published version of One Foot In The Grave, Bones and Cat go on several dates before giving in to their passion. At one point shortly after Bones returns, Cat even tells Bones something like, “I’m not going to fall back with my legs open while declaring my undying love to you.” *grin* That line was me being a smart-ass to my editor, because in the original version below, that’s pretty much what happens. Cat had never stopped loving Bones, and she’d made herself a miserable, self-destructive mess without him, so I couldn’t imagine her putting him off for any length of time once he was back in her life. I also couldn’t imagine Bones wanting to take things slow now that he’d finally found her after years of searching. He’s a patient man, but not that patient.

However, I did end up rewriting what happened when Bones returned because my editor reminded me that new readers who started with One Foot had never “met” Bones before, and thus had no background for their romance. Having Cat and Bones jump right back into bed would therefore diminish the tension that could otherwise be used to introduce new readers to Cat and Bones’s relationship. Since I’d written this well before I had any readers, that thought had never occurred to me, but I could see her point, so I revised. So, in this original draft, you’ll see an alternate version what happens when Bones first finds Cat, an alternate version of their first sex scene, and a little more of Bones’s temper with regards to Noah.

Author’s note: This deleted section from At Grave’ End shows Cat, Denise, Annette and Justina going dress shopping for Cat’s upcoming wedding. Sound like a recipe for disaster? *grins* It was. It ended up being cut because although it was funny, we were trying to get to the main plot faster. As you can tell, a lot of scenes were cut in an attempt to keep the pacing as tight as it could be. I understood the reasoning, but I admit that I hated cutting scenes like this. I love showing the characters doing “normal” things – or at least, attempting to – and in hindsight, I think At Grave’s End could have used a few more light scenes to balance out the darker ones.

Author’s note: I can’t count how many times readers asked me if Cat and Bones would ever have a “real” wedding. In the published books, they only had the vampire binding ceremony because their plans for a traditional wedding were ruined by events in At Grave’s End, but in the original version, they did have their white wedding. It ended up being cut because of – you guessed it – pacing concerns, and also because my editor felt that it signified a happy-ever-after even though the series was far from done. I’d intended to put this scene in a later book, but I could never find a place where it would fit. Ultimately, I decided not to put it the final books because it seemed to trivialize their prior blood-binding ceremony. Bones always considered that as the only wedding that mattered, and it took Cat a little longer to feel the same way, but she eventually did. In the scene where Don dies in This Side of the Grave, Cat thinks about how that strange, very unconventional blood binding ritual was so much more important than any fancy dress or extravagant traditional wedding, but both did happen in these deleted section, and I’m glad to finally get to share them you.

The end of this also contains a never-before-published sex scene where I broke a worldbuilding rule, so if it reads like what Bones and Cat do isn’t possible according to previously-known vampire abilities, you’re right 🙂. That’s why I’ve never tried to duplicate this scene in any of the other books. And for those of you who might be thinking “ANOTHER sex scene?” because yes, there have been quite a few in this collection, this shows that I probably end up deleting more sex scenes than I publish. When I write, I let the characters lead, and then edit out later what I think might be too gratuitous.

Original beginning to Destined For An Early Grave

Author’s note: This original beginning was cut to get to the main plot point of Cat’s dreams about Gregor sooner. It was also set about a month before Cat and Bones take their boat trip, and features Cat and Bones’s first meeting with Geri, the woman who ended up replacing Cat as “bait” on Don’s team. This was an enjoyable scene to write because I got to show Cat and Bones having a little fun with the new recruit. As I’ve said before, a lot of the “just for fun” scenes got cut in the name of pacing, but it wasn’t all blood, danger, jealousy, and despair at Cat’s former job, and this scene gets to showcase some of the lighter moments between Cat, Bones, Dave, Juan, Tate, and the rest of her team. Even Denise came to help out, and as you can see, Denise had a great time moonlighting as a temporary team member.