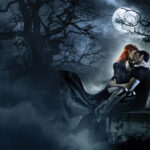 Ever wondered what Bones was thinking and feeling when he and Cat first met? Or how their story might differ if he were the one telling it? Read the free, partial serial THE OTHER HALF OF THE GRAVE to find out!

What is THE OTHER HALF OF THE GRAVE?

A limited-time, free weekly serial detailing some of Cat and Bones’s earliest encounters through Bones’s point of view. Important note: This is not an entire book. Its total length is about 30K words. To put that in perspective, that’s under a third of the size of the first Night Huntress novel. Because of its short length, it only encompasses Cat and Bones’s earliest events together.

Why isn’t it longer?

Because I squeezed in writing this while under deadline for another book, so I didn’t have time to write more 🙂

Long version here. Short version: In September, I re-wrote the first time Cat and Bones met from Bones’s point of view and posted it in two chapters on my blog. Readers overwhelmingly asked for more, so I took a month’s break from deadlines and wrote 30K more. Now, I’m posting that as a limited-time, free weekly serial, albeit unfinished.

Will you ever finish THE OTHER HALF OF THE GRAVE?

Where can I find the chapters?