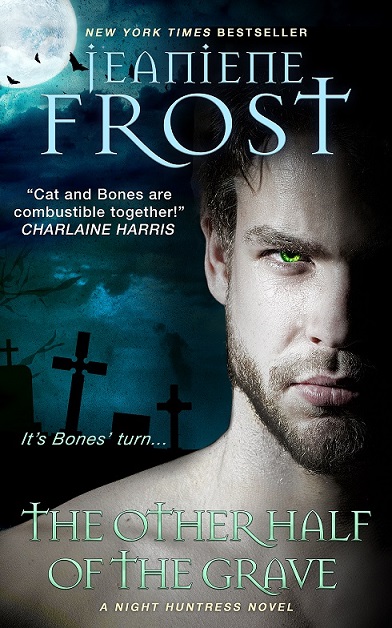 From the New York Times bestselling author of the Night Huntress series, a thrilling new look at the iconic origin story of Cat and Bones, as experienced by Bones…from the other half of the grave.

There are two sides to every story–and the sizzling British alpha vampire, Bones, has a lot to say…

Ever wondered what Bones was thinking and feeling when he and half vampire Cat Crawfield first met? Or how their story might differ if he were the one telling it? Now, relive the beginning of Cat and Bones’ bestselling love story through Bones’ point of view, which reveals a darker, sexier take on their early days, as well as a deeper dive into Bones’ past, the vampire world, and other things that Cat didn’t see when their story was told only through her eyes in HALFWAY TO THE GRAVE.

Get yours in ebook, print, or audio at #Ad Amazon, B&N, Apple Books, Kobo, or your favorite retailer.

If you’re not familiar with how THE OTHER HALF OF THE GRAVE started, I originally published it as free, partial serial back in 2019, intending it as only a fun glimpse of some early chapters from Bones’s point of view. I never intended to turn it into an entire book, but reader response, plus my own enjoyment, convinced me to finally finish it.

Will this be out in audio and print, too?

Long version here. Short version: In September 2019, I re-wrote the first time Cat and Bones met from Bones’s point of view and posted it in two chapters on my blog. Readers overwhelmingly asked for more, so I took a month’s break from deadlines and wrote 30K more. Then, I had other contracted novels to finish, so I stopped there. Now that I’m caught up on my deadlines, I finished the story, and I’m so excited to share it with you.

ETA: The previous unrevised, unedited chapters have been taken down. You can read an extended excerpt from THE OTHER HALF OF THE GRAVE here. (link: https://www.jeanienefrost.com/books/the-other-half-of-the-grave/)

Leave a Reply to Chapter Sixteen, THE OTHER HALF OF THE GRAVE Cancel reply